The Power of Visualisation


Warning: Use of undefined constant php - assumed 'php' (this will throw an Error in a future version of PHP) in /home/customer/www/thefertilemind.net/public_html/wp-content/themes/r-d/single-project.php on line 29

In 1994, Harvard scientists taught a simple 5-fingered combination of piano notes to a group of volunteers using all their fingers.

They were instructed to play it over and over again for two hours a day, for five consecutive days.

Another group of volunteers didn’t actually play the notes, but just imagined playing them for the same period, two hours a day for five consecutive days.  Whist doing this they also imagined hearing the notes. 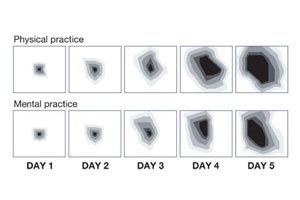 The brain scans taken over the five days show the changes to the brain are almost identical.  The scans for the volunteers doing physical practice and those doing mental practice (visualisation) are the same.

The brain can’t tell the difference between reality and imaginary.

Not only was there no difference in the brain’s response there was a significant effect on their physical performance.
After five days the ability (measured by the number of mistakes made) of the group that carried out mental practice was the same as those that had physically practiced for three days. After just two hours of physical practice they caught up and were at the same level.