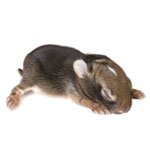 Sitting in the convent gardens a nun brought me a baby rabbit which a cat had caught.  It was still alive but obviously injured or in shock.  I held it in my hands and sobbed my heart out.

After eight years of taking control of her fertility my wife was fertile for the first time in her life.  As you expect the journey had been a long and often painful one.  However after over a year of trying to conceive we could tell something else was wrong.   It turns out I was infertile.

Talk about being whacked on the side of your head.  We didn’t see this coming and having thought we had completed our journey, with our emotional tanks empty we face this.   We moved in to grieving again for the baby we never had.  Well, I say we, I wasn’t really facing my feelings.   This was a wake-up moment for me.  I had a realisation I buried emotions.  I have them in a bin labelled ‘painful’ with a big heavy brick on the lid.  These were not just emotions from our infertility journey, there were all sorts in there going way back.  The brick kept me in protection, protecting me from feeling those feelings.

Out of the blue I told my wife I was taking myself on a silent retreat.  Imagine her surprise when I filled my life with distractions such as internet, work…  I had never been on a silent retreat and thought horrified me but inside something told me this was right for me.  It felt like growth.

Well that retreat was a turning point in my life.  I went, just me and my bin.  I dared to open the lid.  Yes there were tears but there was also peace.

Yes, the thought of this helpless rabbit dying was sad but my tears were the feeling and release of all the emotions I had been keeping locked away in my bin.   I had moved from protection to growth.  I had learnt a lot about myself. I had faced my fears (the painful emotions).  I had grown.  From this moment I changed direction which ultimately led to me being fertile again.  It was my emotions and thinking that had held my body in protection, affecting my fertility.

PS.  I can assure you the rabbit in the picture is alive and well and sound asleep!